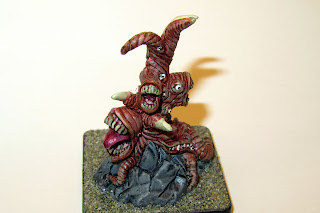 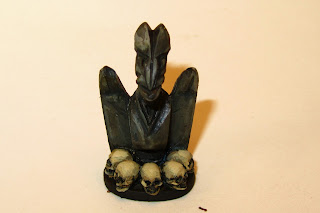 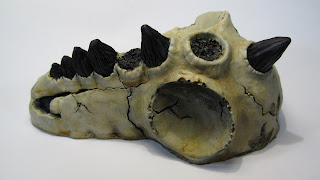 Still messing around with the settings on the camera. Let me know if one of the pictures here strikes a particular balance of, you know, being visible and useful.

The top one is a Dream Blade miniature. That game crashed hard despite WoTC throwing money at people to play. I still have a few figures I'd like to touch up. Happy with the way this one came out. It's very 'Cthulhuisq'.

The second one is an idol from the Dragons of the Emerald Idol in the Fantasy Lords series by Grenadier. I'm working on the small green dragon in the set next. The large one I'm kinda puzzled by what to do with it. I'd need to find a base for it and some putty and pinning for the wings. It's in a kind of goofy standing straight 'what up' pose.

The last one is a nice big chunk of resin from Secret Weapon Games. The skull is actually pretty large. It had no fractures, cleaned up easily and took to the paint well. I used... what I think they call underpriming on it. First black, then ivory, then white. Then the bone triad of paints and then some washes. I only did the spines/horns black because I wanted some contrast with the rest of the skull and red dragons for instance, often have black horns.
Posted by Joe G Kushner at 12:17 PM