To the left we have a member of the Overlord faction for Reaper's Warlord game. In the center, are two Mongolian Death Worms from Rattrap and to the right, one of the heroes from the Lord of the Rings miniature game from Games workshop.

The base on the Overlord member is done with Sepukku Models. Unlike some of the other bases I've made using their molds, this one didn't have a lot of air bubbles and took the impression fairly well I thought. The base on the elf was done with Army painter rubble, highlighted with an old Iron Winds leather, and then Iron Winds leather and white and give a tuft of swamp grass.

I love the idea of the Mongolian Death worms and even wrote a little about them in my own blog. anyone know if they have any game stats? Acid and electricity? Alright! The only thing that's a little sad about the whole thing is the price. Rattrap is selling them for $14 now. When they first went to Games Plus as new figures, they were $10 but I picked them up for $7.50 and it was buy three get one free. To see them at $14 now, almost a 50% increase tells me that material cost are way up and I wouldn't be surprised to start seeing these in resin or another material in the near future.

Anyway, that's enough blathering from one mad man. Let's start seeing what everyone else is up to eh?
Posted by Joe G Kushner at 10:00 AM No comments: 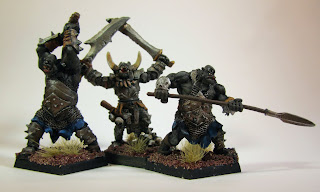 Three Black Orcs from Reaper. I had to base them on the square bases because I intent to one day, perhaps mind you, use them for the Warlord game and it seems most of the black orcs for that army are actually from the Dark Haven line.
Posted by Joe G Kushner at 3:22 PM No comments:

Ral Partha, or Iron Wind Metals, had this figure as a Mage Knight one that they turned into metal. Went together very well. I wanted to try out some rust techniques on him and used several of the MIG rust, oil, and lots of metallics. He was sparyed down with an initial Army Painter plate mail metallic color and then worked on.

by the way, you may not be able to tell in that initial photo, but he's huge. Here he is alongside a Games Workshop lizard man and a Trinity soldier.

Some White Wolf figures. These are some Trinity soldiers. Once again, an Army Painter primer and I picked out the flesh and a few ot her details and gave them a dip. Notice that the bases are different because I lost the original bases that came with them. They were more figures that were just so old and relatively simple, that I wanted them done.

I had a pack of lizard men. They were the old type. I assembled them, sprayed them with one of the blue Army Painter Primers, did the necessary touch ups on the various scales, teeth and eyes, did all the weapons and shields in bronze and gave them a dip in the Army Painter Strong batch. Another group that I was tired of looking at.

So it was four weapons and five of each type so that was twenty down.

Happy Seppuku has some molds where you can make various bases. The one I used here was the Wood Planks. Very bad for Wood Planks. First off, there are bubbles in the mold so you'll have to make sure to smooth those out. Second off, the 'planks' are so huge that you'd be better off using them as concrete streets or painting them up silver for science fiction use. The guys here were sprayed again with the Army Painter silver/steel bit and then touched up with a dip in the Strong tone. Another group of miniatures that I was just tired of seeing not painted.

Another Mage Knight figure, this one is actually plastic. I was testing out the differences between some grounding elements. Here I used some green stuff in front of the left leg to try and make some ground that might look like a cave and then used some spackle for the rest of it. This doesn't count the repainting of the actual figure itself which was relatively simple as I didn't go for a lot of detail on it.

This is another one from Ral Partha/Iron Wind Metals, but this time, from their Vor line. He's a Soviet Officer who did have a back pack but it didn't fit and I wasn't going to play with it. Once again the Army Painter to the rescue but here AI tried to add some more depth to the armor with several shades of blue, brown, and black and some highlights with silver as opposed to the Trinity group that I just sprayed and dipped. The differences are sublte in person but in the photos? Not too sure. the ground is liquidex sand and I used several layers this time and I am more pleased with the results.

Not keeping track anymore because the twenty lizard men, plus the six dark elves, plus the Trinity figus more than shoot past the old 52 we go for. The Army Painter colored primers and dips really made this batch go quick and they've been done for a while.
Posted by Joe G Kushner at 9:08 AM No comments: