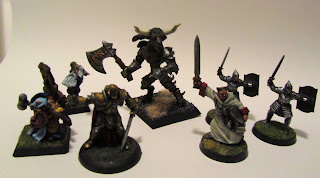 The last of 2010's fully painted miniatures. I'm sure I have some more sitting around here but...

Starting from left to right:

Dwarf with Hammer: Reaper for the Warlord game. WIll be my Cleric of Kord in a 4e game.

Dwarf behind with bolt: Part of a bolt thrower for the dwarf army. Only missing the actually siege weapon.

Gold Night: Fantasy Flight Games. Bought him to act as a stand in for my character one night.

Librarian: Loved the post and finally painted him up. From Games Workshop for the 40K line.

Knights: Two dudes from the Lord of the Rings game. Saw them out and decided to see how the paint pattern went.

I know, some people are thinking; doesn't this guy have anything better to do. Honestly though, I'm innocent. These were in the way on the table and we've got Christmas company coming over so the table must be cleaned anew! One day perhaps I'll have a more realistic painting spot but until then, the dinning room table will continue to suffer my painting wraith. 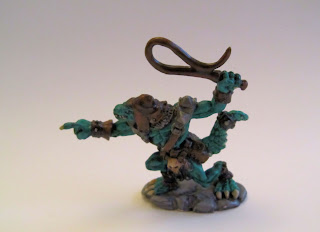 Up first is a lizard man I've owned for years. He's supposed to be whipping two mini-raptors into action. I've long since lost the little bastiches. 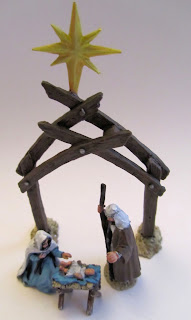 The Nativity by Reaper. I did a few touch ups on it already but didn't have time to take any more pics of it. A nice scene that goes to my g/f. 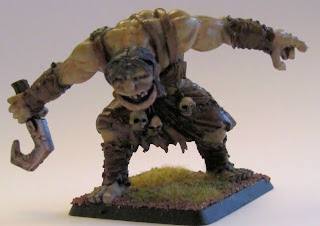 This is a Crocodile Miniature figures for Pathfinder that wound up going to Reaper games. It's a huge figure and could easily double as a hill giant or something larger. Part of my pet peeve with monsters and the near complete lack of standards for the miniatures. Huge problem with WoTC little plastic crack fiends. 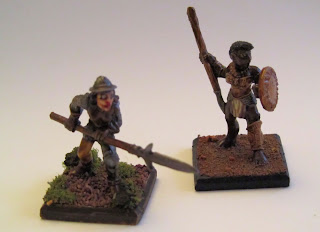 And last but not least, two more of the Mega-Minis. Ugh. I really, really, really have to stay away from trying to provide lipstick to the women and have to cut down on the size of the eyes more.
Posted by Joe G Kushner at 10:43 AM No comments:

An Interrogator and a Close Combat Servitor.
Posted by Gospog at 7:02 PM 3 comments: 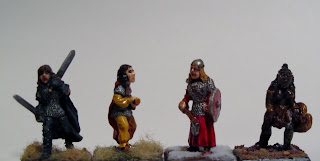 Another batch of Mega-Minis. The first two I tried a little something different with the snow. Think I'll skip the red lips in the future. Or practice a lot more on it. Figure one and three look hideous with it. The first figure I was messing around with the various ahdes of black. The other three are 'dipped' The third I tried messing with some snow and the last is another sand style base.
Posted by Joe G Kushner at 7:14 PM 1 comment:

Another batch of Mega-Minis down. I've got some more that I'm just waiting for the 'dip' to dry before doing the bases.

The one on the far left is done in 'sand' style base because I've got a few I'm setting up in 'gladiator' style themes. Maybe I'll add some dried blood to the base? Probably not because you see she done! They're already packed away.

The third and foruth mini I went to make as similiar as possible in terms of clothing and hair color because I thought they'd make a good brother/sister duo for the players to meet if I ever run another campaign.

Hope you enjoy!
Posted by Joe G Kushner at 7:47 PM No comments: