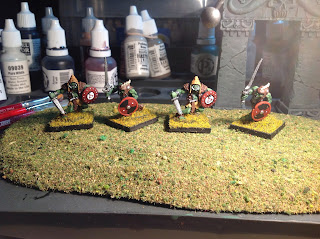 Here are four Ral Partha orcs I painted late in 2012. I have an bunch of minis from the old AD&D line, and decided to paint a few up. The BattleSystem Skirmishes game, with its full color photos of painted minis and terrain, really sealed my interest in miniatures. Oddly enough, during my first year at WotC the company cleared out some old TSR materials, and several of the minis painted and photoed for BattleSystem Skirmishes are now in my collection.

Been a Long Time

Hey all! It's been quite a while since I have posted here. A long while back, the camera I used to take pictures of my minis stopped working. Since then, I've kept up a good painting pace but haven't been recording my work. Well, here's my first mini of 2013, photo courtesy of my shiny new iPad. 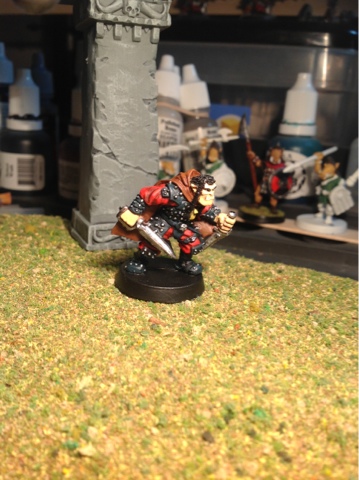 Hey, yes, I do live. I've done a little painting this year, not much to post though. So instead I'm going to post a WIP of a different sort. A bit of "terrain" for my D&D game. It is meant to become a spiral staircase and I have three more to build and paint. They are made from posterboard (for the stairs), with a Pringles can, some Elmer's glue and tape. The pieces are cut with an X-acto knife and a compass rotary cutter (which really cuts down on time. If folks are interested, I may take some shots and do a how to. 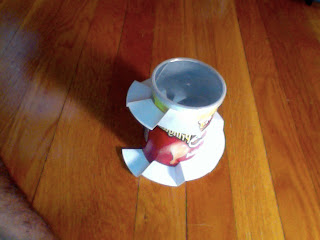 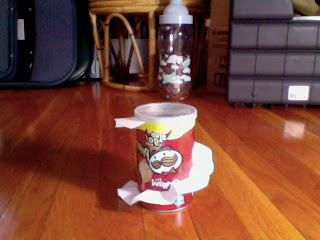 Latest and last round of Reaper Bones

Okay, I think I'm done with the Reaper Bones experiement. I either have or don't want any of the other bones that are currently available but will be watching the line as it matures.

Overall, I'm pretty happy with them. Some of them are direct tie in to the Warlord Game like the Ghost, who is a named character for Necropolis, and the Gnoll, who works for the Black Orcs. The others are good all purpose miniatures.

I think the best we can hope for now though, is that they get some compexity down. All of these are very simple miniatures. In some ways, they are perfect starter miniatures. That werewolf expecially is good for people who want to learn either drybrushing or dipping or using a wash. Same for the worm, ghost, or troll. Not a lot of different parts, not a lot of bags, pouches, belts, or other distractions. Allows you to get something painted quickly.

At their price point, I think they'll be a great seller for Reaper.
Posted by Unknown at 2:21 PM 1 comment:

Okay, this is another one of the Bones figures from Reaper that's inexpensive plastic. I primed it with Alien Purple Army Painter. I then used the same paint name by the Army Painter to cover up a few spots that were missed in my initial spray. Good news? From the brushing on, there is very little difference between the paint and primer so that's a win for me. Another plus in the Army Painter side.

I mixed some flat matt white with the alien purple for the under belly and some demonic yellow for those pustles and some gray or another for the base. I then dipped it and let it sit. No drybrushing, layering, or other bits. I wanted to see how the Army Painter's dip would interact with the material. Worked out pretty good afaic. Total time spent actually painting? Not more than a half hour I'd say. The biggest part was waiting for the dip to dry.

I still have to try out my Privateer Press paints on one of these Bones and I do have a warewolf laying around here somewhere with a ghost...

Not going to break down the price points on this fellow.

This time the figure was washed with warm water and soap and given a primer of Vallejo German Green Brown. I then painted it with Vallejo Game Colors. While I'm tempted to try out all my different paints on it with no primer, since I normally USE a primer when I'm painting, especially to lay down a base tone, I see no reason why I'd stop outside of just for the sake of testing the qualities of the Bones miniatures themselves. If Reaper wants to send me a bunch of Bones for that purpose specifically, I'm all game but until then, most of these will be getting some type of primer. Who knows, maybe the Army Painter spray primer will do something terrible to them and I'll have that to post.
Posted by Unknown at 10:11 AM No comments:

Reaper has come out with a new line of figures called Bones. I've mentioned them before. These are white plastic figures that are very low in price compared to their other versions.

I say other versions, because take for example this figure here. As a Bones figure, he is $2.29.

As a prepainted from the Legendary Encounters line, he is $4.29


The figure I painted? I used the Heavy Gear Blitz back with no primer. The initial coat of paint didn't want to take completely. These require very little diluting on the first level. It makes the paint streak a bit. A few base coats took care of that issue.

In terms of handling, its different. The figure is so much lighter than a normal figure of this size should be you'll find yourself overcompensating a little if you're like me.

The detail is good. Mind you, the talons on the toes tend to sink into the base, but I can't tell if that's because of how the figure originally is or just the Bones version.

Me? I'm working on a gnoll right now from the same line and have a few more of the figures on Order directly from Reaper as my FLSG, Games Plus, has sold out of several of the packs and even some of the online vendors like The Miniature Giant have sold out as well.

If they can keep some new figures coming down the pipe, and the new Reaper catalog mentions that they have thirty already even though there are only previews for the two wizards (one male, one female), I'm hoping to see a few more of the Legendary Encounters make their way to Bones including Vampire, Young Dragon, Giant Spider, Bugbear, Female Ranger, and Minotaur of the Maze, all save the Vampire, I don't own in any form from Reaper.

Anyone else using them? Any opinions?
Posted by Unknown at 5:39 PM 1 comment: