I don't even know the miniature company that makes this guy. Might be an old Grenadier or something. He was on a very small base so I used a larger base and some green stuff with a Happy Suppuku texture on it that I then through some winter grass ontop of to cover where the original base and the green stuff didn't quite mesh.

One of the great things about today's modern era is that between companies like the Army Painter, Vallejo, Reaper, and Games Workshop, no one appears to just be standing around waiting for the other guy to drop. The Army Painter has their dips and now Vallejo has their own version that thus far only includes two; black and sepia. The above, all three from Mega-Miniature, were dipped in Sepia.

The Vallejo dries much quicker and dries flat. Useful for those who don't want the shinny miniatures that Army Painter produces. However, you'll still probably need to hit with a coat of protection as the Army Painter does act as protection.
Posted by Joe G Kushner at 1:16 PM 3 comments:

We don't need no steenking binding!
Posted by Gospog at 7:44 PM 1 comment:

I have barely done any painting this year...but I have done some. I did some tonight, in fact. Nazis with lasers from Dust Tactics.

I wanted the special units to be thematically similar but still stand out. The turquoise was done as an ink wash, and I really enjoyed the effect it gave, so I decided to keep working with inks for the main colors. The result is that so far, these are pretty bright colors, but I like em enough to keep em. 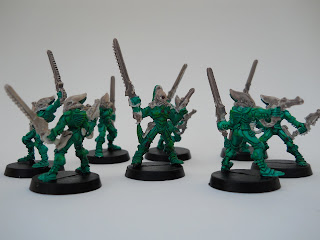 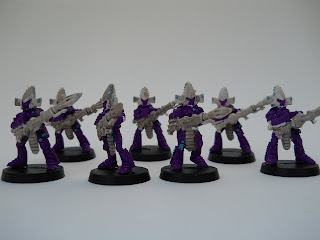 2 units and then a collection of Farseers and Warlocks. I know nothing about Eldar, in general, as I don't play 40k and haven't for about 20 years, but I've always loved the Eldar sculpts.
Of note here is that the two odd colored Warlocks were done by me in roughly 1992-4. I think my skill has gone downhill considerably from then, but I don't obsess about the details anymore. 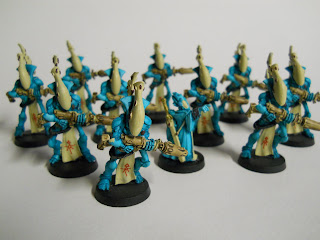 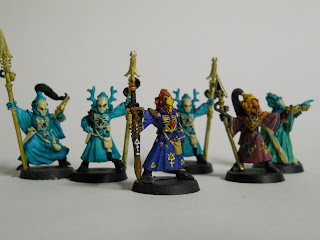 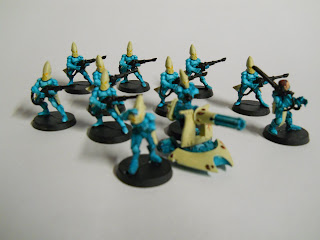 This is the start of an Eldar army a friend gifted to me a few years ago. I was starting to want to paint something other then my usual Privateer Press stuff, and so I pulled these out and started in on em.
Shots of individual Units up in the next post or two.
Note the Fire Drakes and Dire Avengers in the top right of this photo will not be shown in closeup. They aren't my paintjob, but they were pretty good, so I decided to not strip and redo them. 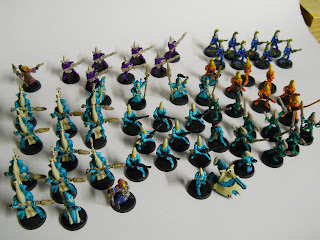 I recently started into Malifaux and the first set I picked up was a Colette Crew. I did the paint here, but the bases are made by a guy local who started this project and then never finished it. 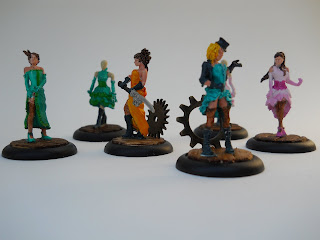 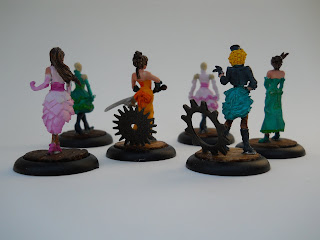 So, I haven't been around in ages. I've actually still been painting quite a bit, as you'll see, but I haven't been posting.
This isn't unusual for me to go in fits of productivity though. It's just how I work.
Anyway, pictures in the next post or two.
Posted by Mr. Jones at 1:37 PM No comments: