#4: Daughter of the Flame redux

This is a new version of the figure I did here. We use some of these for D&D and the fact that I'd put the original one on a circular 30mm base was an issue. The pose was also not great because it would get tangled up in other minis. So I took another figure from the same set and went at it again. Similar color scheme as you can see, but I went for much brigher versions of the colors.
Posted by Joe at 8:18 PM 3 comments: 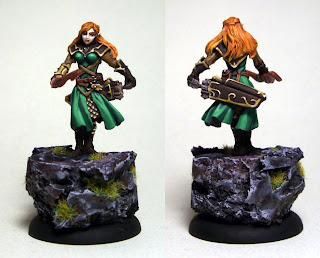 I wanted to do a quick mini after the last one and whipped this one out in a week. She'd had a bit of paint on her before this week, mostly a base coat and I only spent another few hours on her this week. Don't really know what I'll use her for, probably a character mini. The base is a cork stopper that's been cut down.
Posted by Joe at 8:21 PM 4 comments:

So, I know how to use green stuff but how does milliput work? And what do you use it for? The same stuff? Different problems?
Posted by Joe at 10:52 AM 7 comments:

The story on this one is that round about last spring, a friend of mine gave me a bunch of lead he wasn't going to paint. It was a grab bag of lots of stuff, and included in it was this figure.

Fast forward to this month. His wife invites us all to a birthday party for him. Well, I looked over at my painting shelf, saw Turanil sitting there primed and waiting for paint and put the thoughts "birthday" and "unpainted figure" together and got "birthday present".

A week long sprint of painting later and we have the above.
Posted by Joe at 4:39 PM 6 comments:

My catharsis paid dividends! Opening out the first two weeks of progress with eight new minis. I picked some basic ones to get the engine going (critters and the ghoul lord) to make gains on some more intricate ones (skinsaw man and rogue). Pretty happy, overall. Even got better with my new camera.

All of these are for my Pathfinder game. The Rabbit surrounded by rats is a pet of the previously posted Gnome (Tig), who rescued it from Thistletop and named it thusly. Fans of the series will know why (don't wanna give no spoilers!). 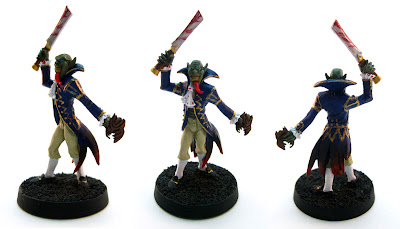 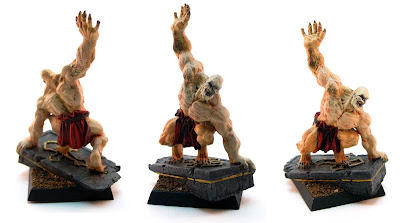 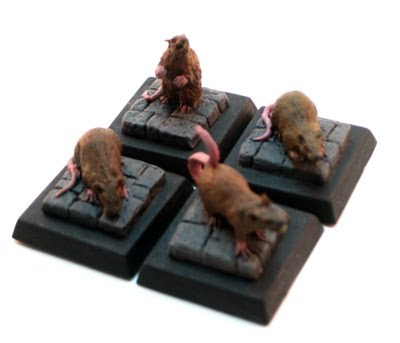 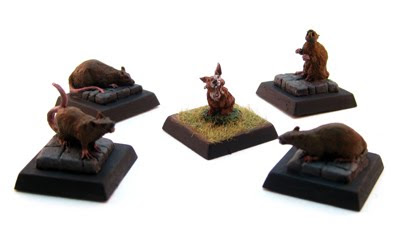 I'm going to do a series of posts over the next bit asking for or presenting info on various topics on how to do miniatures painting etc. Partly I'm looking for more information because I am looking to improve but also I've found links that I think could be useful. No I'm not going to be giving tutorials, I'm not that good. ;-)

So, if you have an favorite links or articles on the topic of preparing a miniature for painting, let us know. For my part, I actually don't have any links on this topic, and the reason I'm looking for more info is that I know the basics, and am fairly decent at it but I've seen minis that are much better prepared than mine and I'd like to know what tools and tips folks have. My biggest problem is dealing with things like mold lines in tight places and rough surfaces on large expanses (like on cloaks). What tools, tips, tricks, or even special materials do you use?
Posted by Joe at 9:08 AM 4 comments:

By November I had already resigned to not having a hope of making 52... from 3. I love painting, constantly call it one of my favorite hobbies, but started doing LESS after signing up here. It boggled my mind.

After some reflection, I've come to the conclusion that there was a layer here for me I had not considered appropriately; fear.

I wanted to show good work and in my head what meant "good" is WAY better than I can achieve yet. However, my brain would not take "not yet" for an answer and became OCD over the stupidest things. My technique and experience just couldn't support it, and so I failed at it constantly. The prospect of showing that work made it way worse. I was already cringing at the pics I posted, for instance.

I found myself spending so much time and effort trying to get things perfect on each mini in an OCD-rrific manner (and failing to do so anyway), that I ended up just frustrated and *didn't* paint at times I could have. That's not how I operate with anything else, so it was a surprise to me after I realized that was what I was doing.

That had to stop! This year, I embrace the suck! :)

Well, not really. I'm just focused on getting decently painted figures on the table now, and working on one technique at a time for every mini... blending, shadowing, outlining, etc. That way I can still practice the stuff that needs work without stalling everything. No one was going to rip me apart here anyway (I mean, it's not Cool Mini or Not, right?).

Since I made this new year's resolution, I've already busted out 8 new minis! Not mind blowing, but obviously far better than nothing at all. Pictures, of course, are forthcoming.

I mean, they aren't doing me any good in the blister packs, anyway.
Posted by Dom C at 11:05 AM 6 comments:

First one here is two more of the gobbo command from the old Battle of Skull Pass. The dwarf is from some Dwarf Artillery set that I can't even find anymore. I just figured, once again, screw it. Get it done.

Reaper Half Orc with scalp filled and painted up as a goliath. The next two Mike painted last year. They are some weird type of flesh golems. Last up some mercenary cleric of Morrow I believe from the role playing side of Privateer Press. The way they're going through the figures thought I suspect it'll be for the table top version soon enough. Hand painted the yellow on there following the painted fig from the site.

#1: Wolf of Orboros the second 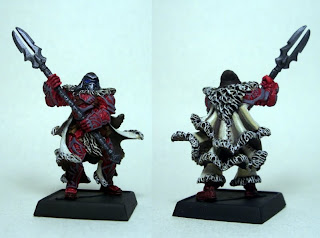 Here's the other Wolf of Orboros I was working on. Similar to the first, but with red and grey. And a side by side shot for the brothers Tweedle. 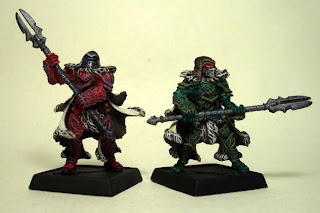 And apparently I was mispelling the faction name for the Privateer Press minis ... damn their lack of classical spelling.
Posted by Joe at 8:04 AM 4 comments:

As we enter 2010, I wanted to give a big THANK YOU to everyone who posted and commented on this blog. I love painting minis, but all too often other stuff gets in the way. Everyone who contributed to this blog helped keep me motivated. There were definitely times when I was more on the ball with getting work and chores around the house done so I could do some painting. Without this blog, I think I would've let a hobby I really enjoy slip off the radar too often.

I'm already hard at work on a new batch of figures (some lizardmen and undead for D&D, along with an owlbear). I hope everyone keeps painting and posting. It's been great seeing what other folks do, and I'm looking forward to another 52 miniatures in 2010.

Thanks, everyone!
Posted by Mike Mearls at 1:37 PM 2 comments:

Well, that was fun! As I look back on 2009 I see a lot of paint hitting minis and folks having fun doing it. There's been some sharing of info, lots of encouragement and lots of pics. Personally, I enjoyed almost painting more minis this year than I bought (17 vs 20) and I painted my second ever "commission".

I think for 2010 my resolution will be to try and double my output from this year (34!), though I may still keep the 52 minis target in the back of my head. I will also try to paint more minis than I buy (I -reaaaaaaally- have more than 52 minis in my unpainted lead pile already). Finally, I think I'm going to try and paint a few "units" and see if I can keep my attention on something long enough to do more than one of a particular paint.

Which brings me to the totals for 2009, we had a bunch of folks hit the 52 mark, congrats to all of them. Everyone else ... stop slacking off.

Have a great new year, have fun doing what you love and love what you're doing!