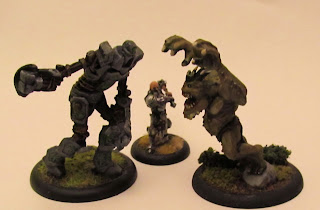 I like the Circle in Hordes. The idea of using stone constructs alongside some savages and primal magics strikes me as awesome.

The guy in the middle is one of two I have of the fig and I went with a test run here. The next time I paint him I'll do the 'stuido' colors. He's from the RPG line.

The third one on the right is a bridge troll. I've owned him for many a moon and figured it was time to knock it out.
Posted by Joe G Kushner at 8:34 PM 2 comments:

Ah Reaper, how I love some of your figs. The first two though, had such damn small integrated bases, that I either needed to saw them off or glue them onto another base. I went with the later option and then used some green stuff to try and mimicik the stone work on the floor. The last one had a standard brocoloi base so I didn't mess with that. 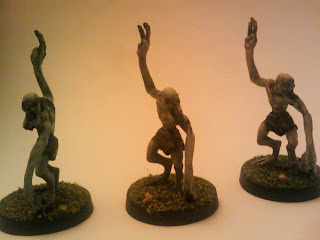 I won an auction on good old e-Bay that came with three of these sinspawn by Crocodille Games for the Pathfinder RPG. They were from the first series, Rise of the Runelords, but make great ghouls as well. 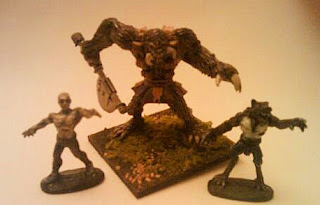 More Superfigs. The two in front are a Flesh Golem and Werewolf. I went with a 'teenage' look on the wolf man with white tee shirt, black belt and blue jeans. The guy in back is mounted on a 2 by 2 base and is some sort of strange sloth alien overlord master. I figure I can use him as some goofy body guard for the Mind Flayers. A mutated quaggoth or something.

Once again, my apologies for the terrible photos. Maybe by the end of the year I'll have things actually set up, but as noted, I've had to start moving a ton of stuff around to make room for the guests the other day and can't just put it back so away it must go.
Posted by Joe G Kushner at 7:01 PM No comments: 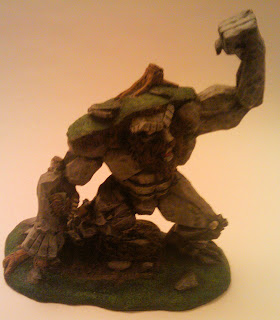 This is a Grendel figure. He's huge. He's also made of resin. He's also got a lot of gaps that I had to green stuff. In the old days I wouldn't have bothered.

This is a set of Grendel Black Orcs. Back when they were first released they were probably huge compared to Grenadier and Rafm and Ral Partha. Now they look like scrunt orcs. Still, one can never have enough orcs... Their gear reminds me of some type of desert bad land bit and the ones in the third row with the iron masks make some great bandits. 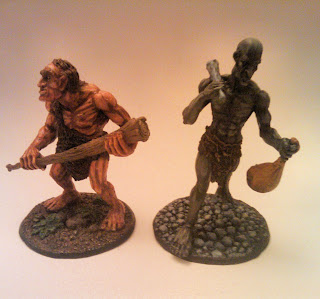 Two giants by Otherworld miniatures. The hill giant was a huge pain to get the hands just right. A common problem when a figure has one weapon spreading across both arms. The feet on both figures did not match the bases and required a LOT of fiddling around. The arms on the stone giant required some green stuff. Still, some great figures and poses and I'd be curious to see what they were like in resin, as the ones I bought were the metal ones.

There are some more shots on the way as I HAVE to clean up. Way too much stuff starting to bump and bungle into each other and there is no more space for it since the table clean up yesterday.

As usual, my apologies for the poor shots. My camera is trashed and I'm using my cell phone in a place with bad lighting. For some reason all of the lights in this place are terrible and there are so few outlets that I've been too lazy to get the natural daylight shots set up again.
Posted by Joe G Kushner at 4:51 PM No comments:

Well, Thanksgiving guests are coming over which means my painting area, aka the dinining room table, has to be cleaned off. Finished off this sucker before cleaning if though so one more post for the holidays; the proto shoggoth by Rafm. 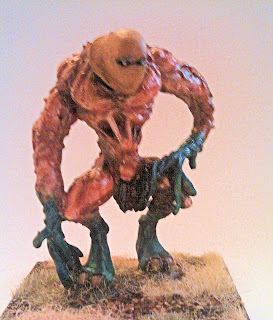 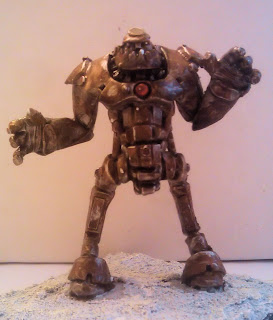 I mentioned what I like about this fig at my other blog. It's 'bot, one of the bricks from the Superfigs line. Most of their figures are realtively simple in design, making them a breeze to paint. The only negative I have about them is that the bases are terrible. Reaper and a few others suffer that so not a huge deal.

I went with a P3 Cold Steel base, then used MIG Light Rust and Dark Rust with Oil and Grease with a few highlights of Quicksilver. The base is a 2 inch piece of wood with spackle painted various shades of white.

I like the rust effect and think that I'll get another one to try out some more weathering before applying the rust.
Posted by Joe G Kushner at 1:53 PM 2 comments:

I have a ton of figs done but no camera and no lighting. The only reason I took this one is because it's for a friend and it's going out tonight. 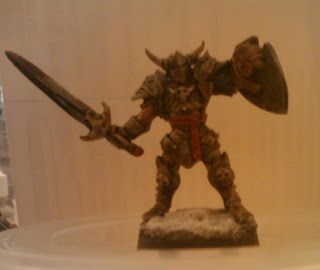 Posted by Joe G Kushner at 4:29 PM No comments: